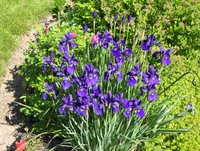 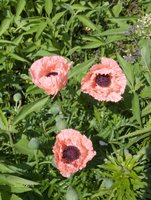 More flowers, which just goes to prove that absolutely nothing has been achieved along the creative line. Any time I had yesterday I spent pretty much staring at what I need to do and is more commonly called spinning my wheels. I finally decided that most of my problem might be due to the fact that my work table is *very* cluttered and that just might be stifling my creative urges. That's my excuse and I'm sticking to it! This morning I intend to do some shovelling and see if that helps.

These flowers are currently putting on quite a show. The blue/purple ones are some sort of iris, but we're not sure which kind. That's what happens when the plant arrives on our back step and not bearing a name. Initially we had several different shades of the oriental poppies, but the only ones that have survived seem to be this pretty salmon color.

Jack had to break down and water yesterday, which is hard to believe after all the rain we've had. A lot of the plants were absolutely fainting for wont of a drink. It appears we're in for another heat wave.
Posted by Magpie's Mumblings at 11:04 AM