Tote that box, schlep that stuff!!

Twelve years ago we moved into this house.
Twelve years ago I swore that I would never (EVER!!) move again.
So....
can anybody tell me why I would be doing it again??
--------
For those of you who might be remotely interested, yes, we are moving into the apartment.  The house is sorta sold and sorta not - by that I mean we have a conditional offer we've accepted pending the sale of the buyers house.  We sit and wait (and hope!) that they manage to sell soon.  We know the people are really in like with our place and would be happy with the expanse of gardens, so we can only pray that they find a buyer.
We really want to spend part of the summer at the apartment so we can enjoy our view of the water (which seems to sound like we're living on the ocean or something nearly as exciting...nope, just our local river with the masses of poopy Canada Geese and ducks in residence).  We finally decided to 'just do it' and make the move and leave the house semi-empty.  We can cut way back in the expenses by doing that.  As of this moment we are 90% moved with pretty much just the large furniture pieces still left.
The downside to all this?
No studio accessibility in either place!!
Posted by Magpie's Mumblings at 7:19 PM 12 comments:

It's so sad when quilts go missing - particularly when you know how much work has gone into their creation.  CT Publishing has issued a notice that four quilts have gone missing from the Spring Quilt Market at Salt Lake City...Allie Aller's "Crazy In The Garden", Joyce Becker's "Dryer Lint etc.", Deborah Kemball's "Floral Sampler" and Sweetwater's "Gathered Table Runner".


Please join with me in spreading the word so that these quilts can be found and returned to their rightful owners.  Here's the release from CT Publishing... 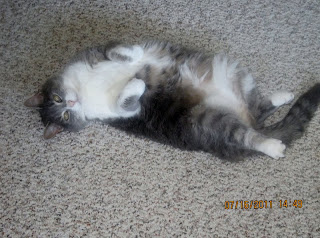 Mitzy...
four sheets to the wind,
on the floor in front of the fan.

Would that we could do the same!!
Posted by Magpie's Mumblings at 5:25 PM 6 comments:

I have a rather large collection of Art Doll Quarterly magazines which I know will not fit in our new abode and I'm wondering if there is anyone out there who might be interested in them.  The postage costs would be astronomical to mail them anywhere.  There are no doll clubs in this area, so that is not an option.  Any suggestions of what I might be able to do with them?

No new news on the house sale front, unfortunately.  We made the decision last night to go ahead and move into the new place and leave the house empty for the time being.  Doing that will reduce the amount we are paying for utilities which will help financially and we can actually enjoy living by the river for at least part of the summer.  We'll take a couple of car loads each day until we get the small stuff moved and then we'll make it official.  We're both looking forward to actually settling in one place!
Posted by Magpie's Mumblings at 10:32 PM 8 comments:

The ups and downs of real estate...and other mumblings

No, the reports of my having skipped the country are grossly exaggerated!
The past week has been an interesting one on the home front.  After almost two months of having our house on the market and numerous (over 30 at last count) showings, we decided it was time to lower our price.  That promptly brought a couple of people out of the woodwork and we got two offers.   We accepted one which was conditional upon the buyers selling their house (which had an offer on the table awaiting approval of financing).  The real estate agent for our buyers was quite confident that deal would be approved with no problems.  We agreed upon a week to remove the conditions...which was today.  (The other offer wasn't a consideration because it was dependent on their selling their house, which hadn't even been listed yet).
Unfortunately our buyers weren't able to sell their house, so we are assuming our deal is off as well.  We haven't heard anything directly from our real estate agent so I guess we shouldn't be certain that we're back to square one, but I have a strong suspicion that's where we're at.  Need I say how tedious it's getting to have to live in a spic and span house 24-7??  Oh yeah, and how expensive it is to maintain both a house AND an apartment at the same time?    It was a gamble we took and it appears quite possible that we are going to live to regret our decision.
I really NEED to get busy on something creative but I  don't want to haul out my crafting 'stuff' in order to work on anything.  I'm a totally messy creator at the best of times and I just know that the minute I start into anything will be the minute the phone will ring and somebody will want to see the house.  That's Murphy's Law, right?  I have several denim jackets I need to be working on but I  end up dumping out all my big plastic totes full of denim in order to pick out the colours I need to work with.  The mess is horrendous and there's no way I would ask any prospective buyer to have to wade through the debris!!  Shoehorning my denim collection back into said totes is not an easy task so it can't be done quickly.
Another sidenote that I found rather entertaining or odd, depending on how you want to look at it.  Last week we had a gentleman in a pickup truck pull into our driveway and start walking around the front yard without so much as asking permission.  I know the gardens are interesting for some people and we have had knocks at the door wanting to know if it would be okay if they looked around.  Anyway, this man finally wandered back to where I was working and said what a nice place we had.  I thought he was interested in the flowers and such so told him he was welcome to look around the back yard too.  Three days later I went upstairs to discover a truck backed up to our garage door (it's not an easy feat to back a truck into our driveway) and that the same man was back...along with a woman (his wife???) and they were busily inspecting our back yard.  Now wouldn't you think it would be proper to at least ask the homeowners permission before you wander around?  When last I heard, I thought that was classified as trespassing??  We think he might be interested in buying the place, but you would think he would approach the real estate people and not assume he could look around as he pleased.   Very odd!
And, just so you know,
us Canadians do things quite differently from
most parts of the world.

No moving vans for us, especially when you
have a son willing to trundle a
freezer down the sidewalk
on a trolley. 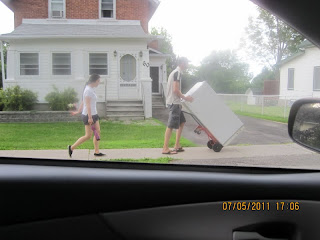