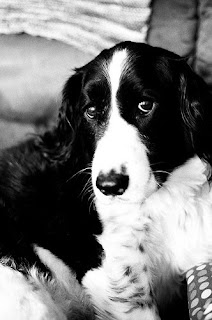 We have had a rotten day - totally. Those of you who have been reading this blog for awhile might remember what we went through with our dog Odin last January, when he ended up having one eye removed because of glaucoma. At the time, the specialist felt that the disease was the result of some sort of infection. Odin was so good about the whole ordeal and has been getting along quite nicely with only one eye.

This morning, we got up and noticed he was having problems with his good eye. Over a thousand dollars later and rushing him to yet another specialist over two hours away, he now has four medications he has to take/be given for a week at which time an assessment will be made. The specialist isn't holding out a whole lot of hope, but at this point we will try and do what we can.

After a week we will know whether the treatment has worked. If is hasn't, we will have to put him to sleep. We are well aware that blind dogs get along quite well - however, we have stairs which can be a danger and also my 88 year old dad who uses a walker to consider. Also two cats that wouldn't have a whole lot of understanding and would be quite likely to claw him if he stumbled into them.