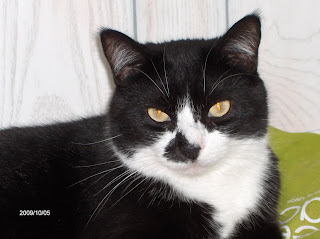 First of all, I want to thank all the people who toured my studio over the weekend, and especially those who left such wonderful and supportive comments! I had a total blast visiting the over one hundred studios that were open on the virtual tour and, by the sounds of things, so did everyone else. Special thanks to Cate and all the team at Quilting Arts for spearheading such a great cyber tour!! (btw...if you missed touring on the weekend, check out the post below where you will find a link to the tour and you can see what everybody is raving about!).

Several people on the tour had included pictures of their studio animals and I neglected to. So...here is sleepy Cosmo, my studio buddy. He was named after the Kramer character in the Seinfeld TV series. Remember how Kramer used to make an 'entrance' into the room? Well our Cosmo does the same...usually at full tilt and via the shortest route possible. If you happen to be in the way, look out! We have another cat too (Mitzy), but she rarely graces my studio with her presence.
Posted by Magpie's Mumblings at 4:24 PM