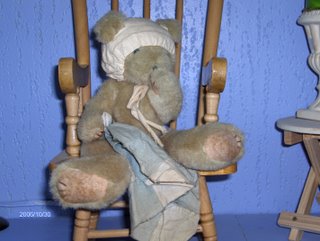 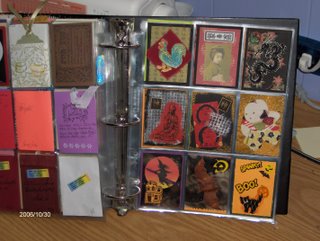 This is part two of yesterday's post, as promised.

I collect ATCs and this picture shows the album I keep them in with some of the cards. For those who don't know, they are mostly made of paper in a 2.5 x 3.5 inch size and are traded, not sold. Much in the way that kids have trading cards for hockey, etc., only these are handmade art. Most often they are done in themes (you can see some Oriental ones and some Halloween themed ones in the picture). The artist generally makes a few in a 'series' and numbers them accordingly (#1/4, #2/4, etc.). I usually keep one and then trade the rest of the series so I can add to my collection. It's a cheap, fast way to make (and collect!) art.

The bear is the very first one I ever got. I never had a bear as a child (plenty of other stuffed critters, but no bears) and decided I loved this one and needed to have it. As a result I became a 'collector' through no fault of my own. People noticed my lonely bear and decided that I was collecting them and therefore needed every bear they came across to live at my house. I became inundated with bears...and I don't collect them!!! I like them, but they aren't a thing I set out to collect. A couple of years ago I fell in love with a rabbit at a craft sale and almost brought him home and then thought better of it. All I need it to have a ton of them running around too! Btw, fyi - a 'bunch' of bears is called a 'hug'.

There are a couple more things I guess I should say I collect...recycled denim, as an entire shelving unit in my workroom will attest. Further to that, I also save up the old labels and design elements from denim for use in my jackets.

I love collecting old world santas too, but only ones that actually 'talk' to me. And books - craft books mainly, especially anything to do with embroidery.

There, I think that pretty much does it! The house won't hold anything else!!
Posted by Magpie's Mumblings at 12:53 PM