I know this isn't the promised picture for today, but it's been one of 'those' days when I haven't accomplished anything I planned on doing. Here's our beloved 'cone head' sporting the latest in designer head gear for dogs. Very fetching, don't you think? I won't take a picture of our black & blue legs because you can use your imagination for that! His peripheral vision is not there - between the eye that's been removed and the cone blocking his other eye.

He has also discovered the joys of using the cone to hoover up snow in the backyard and then bring a ton of it into the house with him. We are developing a whole new type of dance - instead of the chicken dance or the hokey pokey, we're doing some sort of 'avoid the cone, lift feet through the puddles' manouver. I'm sure it will be all the rage on the YouTube shortly...be sure you watch for it! 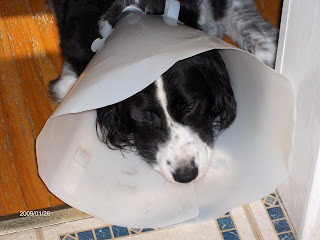 Here's what happens when Jack forms a lap. Two animals, sound asleep (and they say dogs and cats don't get along). 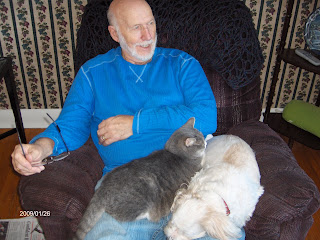 Posted by Magpie's Mumblings at 6:33 PM