First, thank you so very much for all your comments about Odin. We all appreciate your concern so much.

At the moment we're on a holding pattern and doing our utmost with four different times of drops (given at LOTS of various times during the day...and night) in an effort to save his eye. The veterinarian opthomologist thinks that the glaucoma was caused by some sort of infection behind his eye and not something he has inherited. If that is the case there is hope that we can save the sight in his other eye and maybe, just maybe, we won't have to remove the blinded eye. At the very least we are hopeful to prolong the process.

We are also having to deal with an ulcer which formed on the iris of his blind eye due to his not being able to close his eye (and thus keep it moist, which in turn caused it to ulcerate). We have to get the swelling down in order for that to heal, which seems to be happening. All in all, it's been a pretty *interesting* few days!!

Obviously I haven't had a chance to do anything creative (unless you count my going around muttering to myself about times for drops!!) and I'm feeling at a loss. Obviously I need to create.

This picture of Odin is a much better one that Shawn (#2 son) sent for me to post for you to see. You can see why we love him! 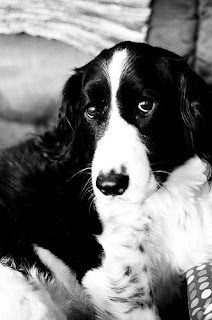 Posted by Magpie's Mumblings at 10:47 AM