Here are two more from my cup and saucer collection (I promise...there is only one more post to come!).

This one is another that is labeled 'Castle...
Hand Painted Japan'
It is also highlighted with
mother of pearl. 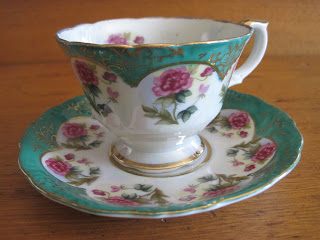 This cup was one that I received
in a gift exchange when I was in public school.
It's the ONLY one in my pitifully small
collection that actually belongs to me and
wasn't inherited.
It is labeled 'Royal Standard - Fine Bone
China - England' 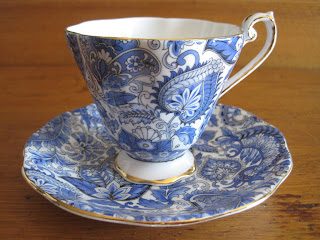 - Kathy Shaw has opened registrations once again for her FREE online Basic Crazy Quilting course.  You can find more information HERE (but as always, you will have to hurry because she's only leaving registration open until the 17th!).

- Sometimes something just makes you say 'awwww' right out loud - and THIS did!

- If I was a parent of young kids I would SOOOO make them one of THESE!  I'm one of those oddball parents who, when their oldest kid asks for his room to be done in an 'outer space' theme, goes over the top.  His room ended up being a whole planetary theme, complete with navy fabric (spattered with glow in the dark paint to represent stars) stapled onto the ceiling, the top half of the walls painted to reflect outer space (including the planets as a headboard) and the earth (mountains, a sea with sailboats and houses).  #2 son wanted a baseball theme, so I found a silhouette of a player, embiggened it and painted it on his wall, along with baseballs and various other baseball-themed things.  When we moved to our last house his room needed re-doing so I asked him if he and his friends would like to write all over the walls.  The only stipulation I had was that there be no profanity.  He and his friends had a blast (and, secretly, so did I!!!).   So, yeah, I'd SO make one of those race tracks in the back yard!

- THIS caught my eye....not because I would use it as it is shown, but I think it would work well in the kitchen to hold a recipe as well as when I'm working on a landscape quilt and want to refer to the photograph I'm using as inspiration.  As it is now I put the photo down somewhere and then it gets covered with all sorts of 'stuff' and then the search is on to unearth it.  NOT that I'm sayin' that I'm a messy creator or anything of the sort!!

- There's a great article HERE discussing the various different types of threads and their uses.

- For those who like to embroider you can go HERE to find links to a series of posts for making all sorts of different flowers.

Another anonymous quote for you today..."If you don't like something, just take away its only power:  your attention"

Posted by Magpie's Mumblings at 10:10 AM