Ooops - error correction from yesterday (blame mental-pause for this one!) - I told you that the new issue of "Crazy Quilt Quarterly' contained my how to for making a crazy quilted window valance.  That was in the PREVIOUS issue!!  The new issue has my crazy quilted butterfly project.  As I said - oops.

I told you yesterday that I had a post planned but the weather was dull and pictures wouldn't be great.  Well - it's still dull (warm though!) so I decided to do it anyway.  A friend and I were into a discussion recently about crafting supply storage solutions for small spaces.  Many of you know that we live in an apartment and my sewing space is the second (and small!) bedroom, which also serves as a guest room when needed as well as housing my computer desk.  I have managed, through trial and error, to stuff a large amount of stash into this room so I thought I'd share what I did with the closet.  It's your typical closet - with double sliding doors, one shelf and a rod.  I removed the rod and left the shelf in place.

I've taken four pictures to show you the four (more or less) sections of my closet.... 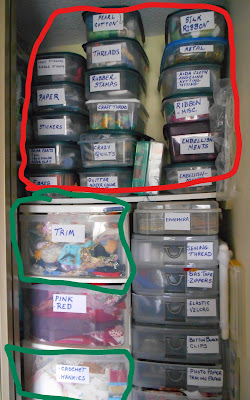 This is the upper right side.  The red circled area contains plastic (dollar store) shoe boxes filled with all sorts of crafting supplies.....threads, ribbons, assorted embellishments for crazy quilting.  Below that I have stacked a three-drawer plastic unit (on the left) and two more, smaller in depth, three-drawer plastic units on the right.  The green circled drawers hold various types of fabric trims and my hankie/doily collection.  On the right are more sewing supplies, along with some of the papers I use for various things.  There's a plastic 'box' on the right that holds my paper ephemera. 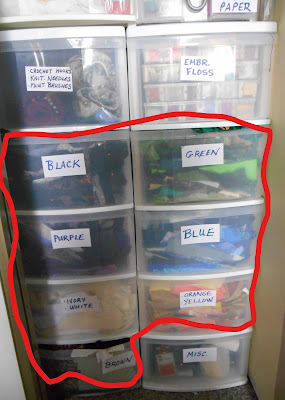 This is the lower right side made up of two five-drawer plastic units.  The red circled area are my fabrics for crazy quilting (along with the pink red drawer in the first picture)...sorted into colour families.  The top two drawers - one holds my containers of embroidery flosses, sorted according to colour families and, on the other side, my knitting needles, crochet hooks & paint brushes.  The Misc. drawer on the bottom holds a lot of 'stuff' that doesn't fit anywhere else. 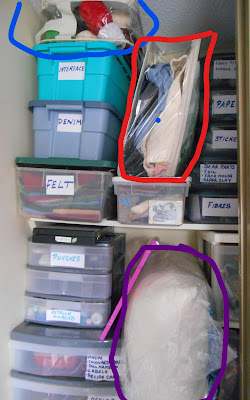 This is on the upper left side.  The blue circled bag holds my crochet cottons (using one of those zippered plastic bags that sheets often come in)....the red circled bag holds some misc. fabrics;  and the purple circled area is a bag of stuffing for toy making.  Three plastic bins hold my interfacing, denim and felt.  Below that there's another small three-drawer plastic unit that holds my paper punches and metallic threads for sewing. 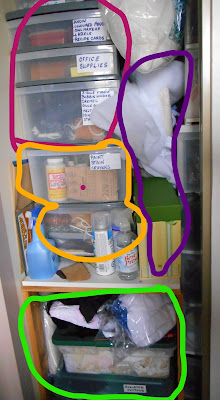 And here is the lower left side.  The red circled area is primarily things that fall under the 'office supplies' heading.  The yellow circle highlights another plastic drawer unit that has my folk art/water colour paints (top) and beneath that is a drawer that I call my 'component' drawer.  It holds all sorts of 'stuff' that can (maybe) be used for crafting.  It includes some techniques and things that I've tried and not liked, but have kept in case they can be re-worked at some point.    The green circled area holds two larger plastic 'suitcases' - the bottom one holds assorted cotton fabrics that fall under the 'yardage' category and the top one holds my lace fabrics.  The 'blob' of stuff above that is just some miscellaneous 'stuff' that doesn't fit anywhere else.  Someday I'll pick up another suitcase to hold those.   The purple circled section holds a quilt bat and the yellow/green box you can see holds a selection of greeting cards.

Well, there you have it.  Storage.....According to Magpie.  This system works for me and I have a LOT of stuff stashed into what basically isn't a very large closet.  Of course I have other crafting supplies in other units elsewhere in my room, but this is the basic 'guts' of my storage.

- There's an interesting article HERE about natural dyeing using things from your supermarket.  And if you have a look HERE there are some comparisons with using leaves.  And if you'd like to try dyeing with Kool-Aid, there's a tutorial HERE.

I'll leave you with just those mumblings for today because this post is quite long enough.  For the quote, it's another anonymous one..."Just because some people are fueled by drama doesn't mean you have to attend the performance"

Posted by Magpie's Mumblings at 1:50 PM