The hectic part of the season is over and now it's time for the cocooning to begin (at least here at Chez Magpie).  After Christmas for me has always been a time to sit down and delve into as many books as I can manage to read until the urge passes.  The projects for Christmas giving are done and nothing new is clamoring to be created (not to say that the to-do list isn't trying to attract attention!).  My studio is as tidy as it ever gets and I hate the thought of messing it up, at least for a few days.

I think this was one of the best Christmases I've ever had.  I actually got a few things that are for creating with - something I am always happy to get and rarely do.  I was even given a couple of online classes through Craftsy - both of them about creating pictorial quilts which is something I have wanted to try out for some time.  I have a glimmer in my brain that I would like to attempt to re-create old decrepit barns in fabric.  So many of them are falling down in total disrepair and nobody seems to care. Perhaps trying to recreate them in fabric might be a good thing.  On the other hand, the technique is so far removed from my normal range of ability and I'm quite truthfully terrified to even try it. Maybe now I've put my dream into print and shared it with you I will be honour bound to at least give it a try!

Alas there are no pictures of my creations to share with you today, so how about I show you one of Jack's creations instead? 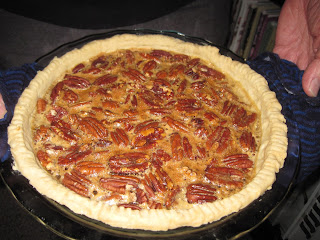 We spent Christmas with our #1 son, daughter-in-love and grandson and their dinner theme was 'southwestern'.  Pecan pie is, of course, part of that.  Jack is well known for his amazing butter tarts, so it wasn't much of a stretch to create a pecan pie.

I found a few things to mumble about...

- I'm sure most of you have a 2017 calendar already, but THIS freebie one is absolutely beautiful and you might like to download it.  You might just want to use the images themselves in your projects!

- If someone in your house got Lego for Christmas, perhaps THESE fun ideas might be just the thing you need to keep them occupied over the rest of the holidays.  Scrolling down to the bottom will yield another link to yet more ideas.

Your quote for today is another one from an anonymous source...  "Life is too short to wake up in the morning with regrets.  So, love the people who treat you right and forget about the ones who don't.  And believe that everything happens for a reason....if you get a chance, take it; if it changes your life, let it. Nobody said that it would be easy.  They just promised it would be worth it"

Posted by Magpie's Mumblings at 11:51 AM