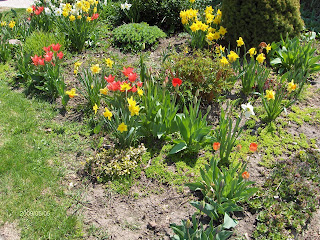 These are just some of the tulips and daffodils we have in bloom at the moment. Just before supper tonight we had a huge hailstorm; hopefully it didn't damage them too much.

I have one and a half pages of 'the diary' typed up, which has taken forever. I'm a fairly fast typist, but I'm not so good with learning the ins and outs of a new computer program. Thank goodness for the 'Teach Yourself Visually' series of guide books!! I had to learn to make columns, what font to use, what size, how to number pages, and all sorts of interesting things hitherto unknown to me. It's going to be a HUGE project, but I have promised myself that I will type for 20 minutes per day and sooner or later it will be done. (For those who haven't been reading my blog for long, 'the diary' is a 30 year chronicle of my gr.gr.grandfather's life on his farm, beginning in 1869 and ending shortly before his death). Ultimately I will be having it published so everything I do now is with an eye towards that goal.

I have finally decided on the design I will be using for the ring bearer pillow commission, which is a step in the right direction. Picked up some lovely fabric today which I will use for the centre part. Hopefully it will take well to being embroidered on because I want to do the bride & grooms monograms on it. The four corners of the pillow will be fans, done in tones of cream, ivory and white. I also picked up some really pretty pearl trim for the edges of the fans. Yes, I'll post pictures as I go along!
Posted by Magpie's Mumblings at 6:39 PM