Stuff and maybe a little nonsense (Mumblings, in other words!) 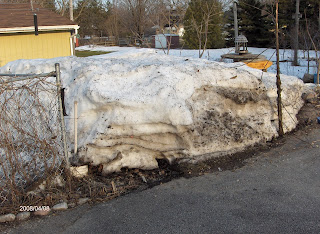 Today is a mumbling day so y'all have to suffer along with me because if I don't mumble, I got nottin!
First...see that ugly, ugly picture? That's the remains of what was over a seven foot tall pile of snow in our backyard. It's still close to six feet in the middle. Maybe it'll be gone by June?
Second...if you have a child who likes doing crafts and such, there's a new blog which looks to have some great ideas. Check out http://belladia.typepad.com/crafty_crow
Third...DH and I spent a few hours yesterday wandering about in Toronto at the Spring Home Show. My tootsies are not likely to be the same!! Wow, was that show HUGE!!! I was a bit disappointed though because I was hoping for lots of displays of furniture and decorating. We aren't searching for hot tubs, a new roof (well, Jack could argue that point 'cause I know he'd love a new 'roof'...hair!), marble floors, and such but would love some ideas for sprucing up the look of our house. Marble floors are not in our budget!
Fourth...My tootsies weren't the only sore part of my anatomy yesterday. Since I seem to need to learn things the hard way, I shall tell all so that you don't attempt what I did. You know how the only decently pretty bras seem to be sold with those horrible underwire instruments of torture? It is NOT a wise idea to try to remove wires whilst semi-wearing the bra, especially if you're using a pair of scissors. Nope I didn't cut myself but gave my poor double D one heck of a bruise when the scissors finally decided to cut and the handles snapped shut (with tremendous force, I might add). ouch. Take a word from the newly-wise folks, and don't try that at home (or anywhere else).
Fifth...I am working on a project, but can't show it here (yet). I will when it has arrived at its destination.
Sixth...I heard via the grapevine that there's a new crazy quilting book just out...'Crazy Quilting - The Complete Guide' by J. Marsha Michler. If this book is as good as 'The Magic of Crazy Quilting' I know I want it. I'm sure if you want further info, you could check it out on Amazon.
Ok, that's enough mumbling for today!!
Posted by Magpie's Mumblings at 7:15 PM