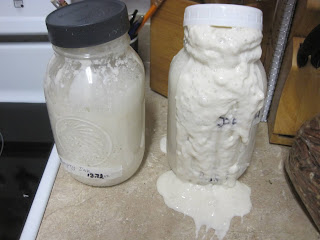 Resident Chef made a mess!  The jar on the right is sourdough that has escaped the bonds of the jar and the jar on the left has the lid perilously perched on top about ready to follow suite.  He tried a different method of feeding it and discovered that a much bigger jar is needed.  What was even better is that he cleaned it all up, lowered the level in the jars and then went back a couple of hours later to discover it did it again!  The stuff is alive and trying to take over the world I tell you!!

I don't know if I'll be able to keep doing the challenge, but here's a good start... 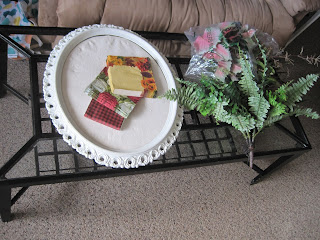 Terrible photo I know, but there's a black metal coffee table with a combination glass & slate top;  an oval frame; a bunch of artificial greenery and 3 packages of paper napkins that are currently in the process of being used up on a daily basis rather than cluttering up the drawer.  On top of what you see  here, there's a long skirt that's too difficult to alter; and there's also two queen-sized sheets (headed to the humane society).  Oh, and a duplicate phone book (why on earth did we have two??!!).
Making Space item count.....10

AND....the second oops (more like a 'what have we DONE' moment) is that we got up on Monday and went about our lives in the normal way only suddenly found ourselves in possession of a new-to-us car.  Furthest thing from our minds!!  The salesman called saying he had an anxious buyer for a car just like ours...a 2011 Rav4 and (the universe aligning as it does at times) he had a trade-in come in on a car he knew we'd like.  So....as of next Monday we'll be the proud owners of a 2016 Toyota Rav4 XLE complete with sunroof (who knew 2 old fogies like us would have a car with a sunroof!!).  We're still in shock.

- There are a number of free cross stitch designs HERE.

- C & T Publishing has announced the launch of their new online learning platform and there's several interesting-looking courses on offer.  You can read more about it HERE.

- THIS is a rather cute little Christmas tree design that would be fun to make.  And while you're there, be sure to scroll through all the other great tutorials (HERE)

Today's quote...."Anyone who thinks fallen leaves are dead has never watched them dancing on a windy day"

Posted by Magpie's Mumblings at 11:13 AM