Mumblings, of a random nature

Today, because I have lots of mumblings to share, I think I won't subject you to what I've been working on.  Suffice to say one ball of yarn does not a pair of socks make (argh!) and on a positive note, applesauce happened.

Most of you know that Pam Kellogg has passed the reins of the crazy quilting magazine over to the capable hands of Lisa Boni.  The first issue under her guidance is now available HERE!  I'm listed as one of the Editorial Assistants on this publication so please check it out! 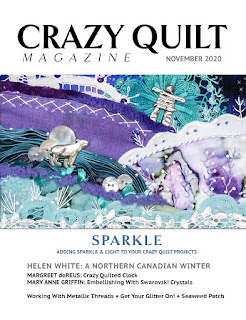 AND - many of you will remember me posting a link to the latest '30 Days To Less' challenge that was happening all throughout October on Becki's blog.  Now she has come up with another challenge that will last all year and help with your decluttering and downsizing (AND it's fun too!).  Go HERE to read her post to find out more. 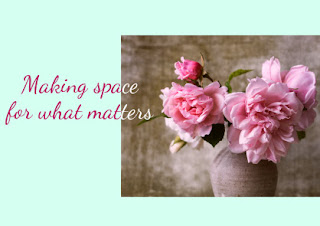 AND, in the interests of it never being said that this is not a full-service blog (hah!), I've discovered something (with thanks to Maureen!) that I thought I should share with you.  If you, like me, are having a hard time reading some of the small print online, try simultaneously using your 'Ctrl' and the '+' buttons on your keyboard.  Click until you reach the size that's comfortable for reading.  My cataracts are thanking you Maureen!!

- The weekly newsletter from Inspirations had a bit about THIS artist and I must admit I was wowed by what she does!  Be sure to look through all her galleries.

- THESE are really cute - and would make great decorations (and gifts too!)

- Bonnie Hunter has just announced the beginning of her new mystery Quiltalong and you can read all about it HERE.

- I'm seeing a lot of pocket shawls showing up 'round and about the internet so thought I'd share an easy crochet version HERE that looks like it would be a quick-make for Christmas giving.

- If you're in the gnome-liking camp, perhaps one of THESE would be fun to have on display over the Christmas season - and with a simple change of colour, any time of the year.

- THIS takes you to part one of a great tutorial to make fabric moths (no - not the type the eats your woolens!!).  If you scroll to the bottom of the post you will find links to the remaining parts of the tutorial.

Today, instead of a quote, I'm going to share something that had both Resident Chef and I in tears of laughter.  Hopefully you will enjoy it too!

Do you fart in bed ?
If this story doesn't make you cry for laughing so hard, let me know and I’ll pray for you. This is a story about a couple who had been happily married for years, the only friction in their marriage was the husband’s habit of farting loudly every morning when he awoke the noise would wake his wife and the smell would make her eyes water and make her gasp for air.
Every morning
she would plead with him to stop ripping them off because it was making her sick. He told her he couldn't stop it and that it was perfectly natural. She told him to see a doctor, she was concerned that one day he would blow his guts out. The years went by and he continued to rip them out. Then one Christmas day morning, as she was preparing the turkey for dinner and he was upstairs sound asleep, she looked at the innards, neck, gizzard, liver and all the spare parts, and a malicious thought came to her. She took the bowl and went upstairs where her husband was sound asleep and, gently pulling the bed covers back, she pulled back the elastic waistband of his underpants and emptied the bowl of turkey guts into his shorts. Sometime later she heard her husband waken with his usual trumpeting which was followed by a blood curdling scream and the sound of frantic footsteps as he ran into the bath room. The wife could hardly control herself as she rolled on the floor laughing, tears in her eyes! After years of torture she reckoned she had got him back pretty good. About twenty minutes later, her husband came downstairs in his blood stained underpants with a look of horror on his face. She bit her lip as she asked him what was the matter. He said, “Honey you were right… all these years you have warned me and I didn't listen to you.” “What do you mean?” asked his wife. “Well, you always told me that one day I would end up farting my guts out, and today it finally happened, but by the grace of god, some Vaseline and two fingers. I think I got most of them back in…….............…..”
Posted by Magpie's Mumblings at 8:49 AM