The Creativ Festival ended up being rather a disappointment.  I've missed going for two or three years and was quite surprised to see that the entire size of the show has been cut in half.  Whether that is simply a sign of the times or because the cost of having a booth at the show is too high, I don't know.  Having half the space meant that everything was crammed in; the aisles between the displays were narrow too.  Several of the vendors that I particularly like weren't there at all.  The major sewing machine companies were represented but without the space they formerly had.  The machines looked all scrunched together and it wasn't at all an invitation to test them out. 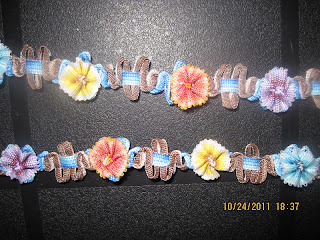 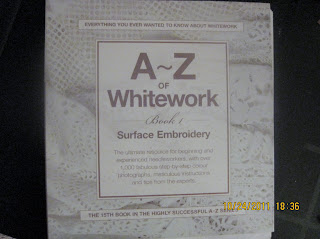 I only purchased two things.  This lovely trim caught my eye.  It will most likely be torn apart
for the pretty flowers.

This book was on my wish list before I went so I felt lucky to find a copy.  Whitework has fascinated me for a long time so I know this book will be a good read.