Here's prototype # 2 of the knitting needle roll, which still isn't what I want. I know, I'm too fussy!! The way you see it in this picture is great for holding the long single-point needles, but not so good for the shorter double-points. Can you see the flap on the left side? It's the area that the shorter needles are *supposed* to fit into. Key word here is *supposed* because they don't. The pocket is about 2" too short. Back to the drawing board on this one!! 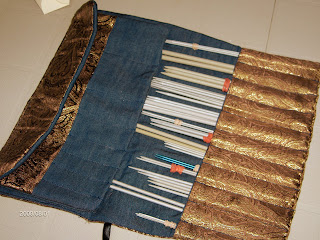 This picture shows the short-needle pocket lifted up and that the area for the longer needles is perfect. I'm also not happy with the means of tying it up, so that will change with prototype 3 too. This pattern is Butterick B5006 as written. 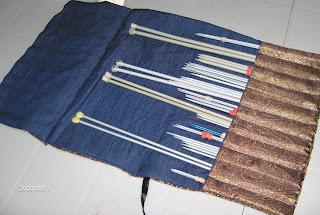 Ok, ok...I know you're all simply on pins & needles about what I'm planning for post #600. Who would have ever thought that I would find enough to mumble about to fill 600 posts. Who would have ever thought that I would even get one reader, other than my kids? I have readers, people!! Woo hoo!! And they're great readers too because they comment and they show interest and have ideas and they just generally support me in my creative journey. Thank you, a thousand times - all of you.
Now, on to the contest!! I told you that you would have to work for this giveaway and so you shall - or your name won't go in the draw (so there). All you have to do is leave a comment with the following information included - your three top favourite blogs (this one is NOT to be included, because it goes without saying that it's your favourite..right? Right? Awww c'mon).
I digress - leave a comment on any of my posts 600 thru 605 and tell us your THREE favourite blogs and why. Make sure to include the blog addy so we can check them out!! Your name will then be entered into the draw to win....tah dah....tah tum.....tah diddly......
A BOX OF TREASURES FROM MY STUDIO!!!!!!!!!

Posted by Magpie's Mumblings at 2:58 PM