Today there as absolutely nothing creative done in my studio.  Instead we spent the afternoon (along with Resident Chef's brother) tramping around in cemeteries searching out long lost relatives.  It was fun, but hot!

This is one of the more interesting ones we happened across and it was enough to send me off trying to find out more about the Fish Creek battle. 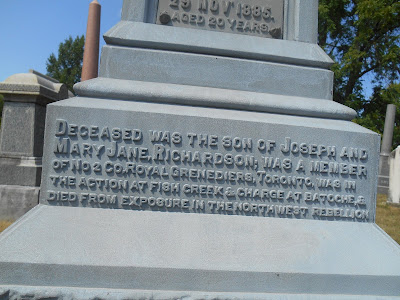 The Battle of Fish Creek (also known as the Battle of Tourond's Coulée ),[4] fought April 24, 1885 at Fish Creek, Saskatchewan, was a major Métis victory over the Canadian forces attempting to quell Louis Riel's North-West Rebellion. Although the reversal was not decisive enough to alter the ultimate outcome of the conflict, it was convincing enough to persuade Major General Frederick Middleton to temporarily halt his advance on Batoche, where the Métis would later make their final stand.


First we knew that there was  a relative in this battle.

- Good article HERE re prepping for a booth in a craft show.

- THIS is a really cute project that some of you might enjoy playing with.

- I know many of you enjoy online quilt shows, so have fun visiting THIS one!

- THIS is for those of you who love your dogs.

- Have a peek at the work of THIS artist!

Today's quote..."I'd give up chocolate, but I"m not a quitter"

Posted by Magpie's Mumblings at 6:58 PM