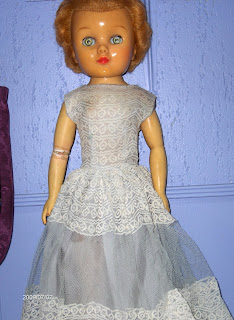 This is my other 'old' doll, which I received the same Christmas as the one I showed yesterday. My bachelor uncle gave this one to me (never expected he would even think to buy a little girl a doll, but he did. I think that's mostly why I treasure her). This is her original dress, but I have long since misplaced her underwear, shoes and her hat. You can see she has a 'broken' arm (which I took to a supposed restorer, who did an AWFUL job). She is all soft vinyl, which is really starting to deteriorate. 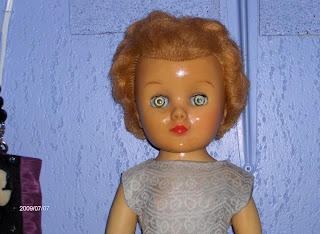 Below is my treasure, old and tattered tho he may be. He was once a pajama holder & has a zipper in his bottom. I never store pjs in him - he held little pieces of paper with all my childish writings and treasures. He is totally threadbare and his stuffing is falling out. Some of it has been replaced by my mother with old nylon stockings (no, they aren't panty hose!). 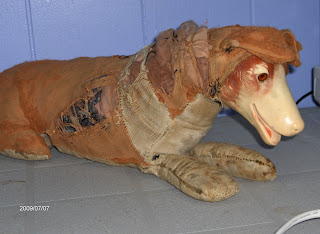 I remember my aunt giving me what she thought would be a replacement Lassie, but I couldn't bring myself to love it. This poor fellow was my bedtime huggee for years and I still can't bear to part with him. Funny thing about memories.

UPDATED TO ADD: You have to read the quote on Paula's blog today! It's one that will certainly made you think. Please read it!!
Posted by Magpie's Mumblings at 5:45 PM