Yes, the post title says it all.  I don't have OCD but I'm obsessed with doing landscapes and I don't see it ending anytime soon.  Good thing I intersperse other things into the mix or I'd seriously run the risk of becoming boring.  Now, don't bother to make a comment on THAT statement because I already know I'm boring and you won't be telling me anything I'm not well aware of!  At least I am nothing if not predictable!
So...without further mumbling, here is the next photo that will be subjected to my play time.... 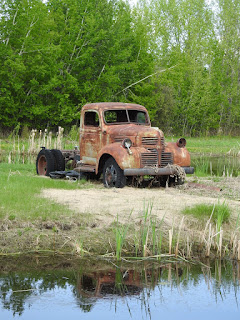 Original photo once again
shared with the kind permission
of Dale Stewart
The pile of hexie flowers is growing too.... 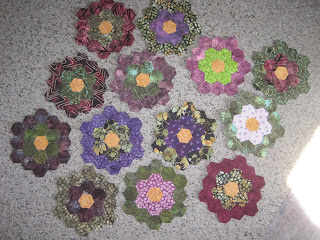 Sorry about the washed out bit on the right - a
patch of sun on my floor
And speaking of the sun - and heat.  We've been having several very hot days here and this year, here at Chez Magpie, it's proving to be quite the juggling act to keep cool.  Our apartment faces east so we get the morning sun and we keep the windows covered to keep it out as much as possible.  In the living room we have a portable a/c unit and also a tower fan which we aim down the hall towards the bedroom and my sewing room.  There's another tower fan in the doorway of my sewing room which helps to aim the cooler air into my workspace.  Then we have ceiling fans in both the bedroom and the sewing room.  Well this year, for reasons entirely unknown, we apparently don't dare run the a/c and the two tower fans alongside my ceiling fan OR the bathroom light without blowing a fuse.  I've never been able to plug in my iron with the a/c unit running since the day we moved here.  Why we suddenly have to either piddle in the dark OR remember to turn off the a/c before we use the bathroom is a complete mystery.  And of course the building management just says well don't run the a/c because it's drawing too much power.  But - it never was an issue before!!!?????  Resident Chef thinks I'm a conspiracy theorist because I suspect the entire issue has developed because they installed 'hydro usage meters' in all the units last year...supposedly to monitor our usage.  I wonder if it reaches a certain level of usage it triggers something that blows the fuse.  Just my theory which he thinks is ridiculous.
- Thought I'd share a really simple mask design I came across when I was searching for an easy version to make for kids.  Go HERE for that (also has adult sizes in the pattern).
- When and if we ever get to do any travelling again, perhaps one of THESE would be a good thing to have (would make great gifts too!).
- I don't know the artist behind THIS but it's so pretty that I just had to share.
- Have a look at the eye candy found HERE!  Oh, and HERE!!!!
Today's quote is from Walter Winchell..."It's a sure sign of summer if the chair gets up when you do"
Posted by Magpie's Mumblings at 10:43 AM