Today I'll carry on with the studio photos so you can see some more of the evolution. The first set of pictures are from the re-do of the basement studio I had at our previous house (the one that was previously purple and green)..... 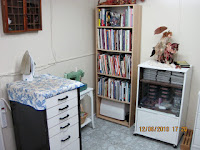 L - I don't own an ironing board per se and the top of the cupboard on the left worked very well with an ironing pad on top.
M - The redone dresser, along with two dolls.  The one on the left was one I received from a round robin, the other I made.
R - Same configuration as in the previous photo 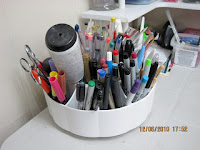 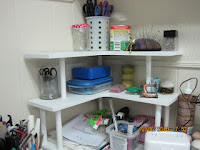 Closeups of a couple of my organizational 'things'.  These have stayed with me throughout several different studio revamps over the years.
And....now for the current look of my studio space.  It's in the second bedroom of our apartment and must share the space with the computer as well as there being a pull-out couch for guests. 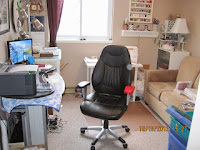 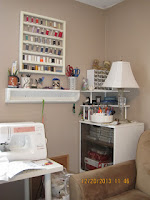 L - This is more or less an overview of my room.  You can see the pullout couch, my computer station (which also serves as my ironing board) and my office chair.
M - The same cutting table as I had at the house along with the shelves above that still hold those oh so many jars of buttons!
R - The same cupboard with one of the two thread holders I had at the house - painted now.  The little shelf below my son made for me when he was in school. 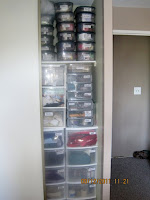 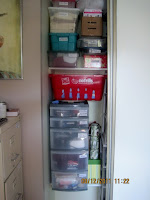 L - This area has changed somewhat since this photo was taken.  The filing cabinet remains the same but the area to the left has been overtaken by large Rubbermaid totes which hold my landscaping fabrics.
M & R - These show the organization inside my closet which has two sliding doors. 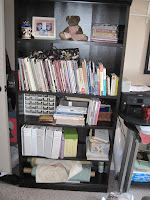 And finally, the book shelf.  Hard to get a decent photo of it because I can't stand back far enough to get it all in.  Guess I could knock a hole in the wall but methinks the building management might frown on that.
- Some of you might be looking for an idea to use a fabric panel and perhaps THIS might give you an idea.
- Have a look at the creations by THIS artist (click on his 'Works' label).
- And HERE is another artist that works outside the box.  Be sure to peek through all her galleries.
- And just for fun, HERE is another one!
Today's quote..."In the rush to return back to normal, use this time to consider which parts of normal are worth rushing back to"
Posted by Magpie's Mumblings at 11:13 AM