Yep - he chopped down cherry trees and I lob off lilacs!

After doing tons (!) of French knots to highlight/create the lilacs on the bush, I decided that the foliage needed to be augmented too.  So...I came up with a grande plan.  You know....one of THOSE plans that are bound to go amuck....and this one did, spectacularly!!!  The plan involved felting the greenery which I thought would be a good foil for the French knots.  The search began for green wool and I lucked out and found a couple of balls of 'almost green' at the local department store.  No problem, said I to self, I can simply water down some paint and dye it!! W-e-l-l, that sorta worked.  Undaunted, I soldiered on (see that?? Another reference to good ol' George!!).  I felted it down and, wonder of wonders, I only broke two felting needles and punctured my finger once.  I was on a roll!

Hmmm....all that felted yarn needed to be held down somehow, so how about free motioning with green thread?  The roll continued (and you KNOW already that the roll was right straight downhill, don't you).

I sat back and stared at it.  I waited until night and stared at it some more.  And, you guessed it, I HATED it.  Abhorred it actually.  So...undaunted (and refusing to admit defeat)....I hauled out my paint and dabbed it here and there.

Sat back and stared some more.

Well, suffice to say the scissors were applied and with good ol' George's approval, I just cut that lilac tree right outta there. 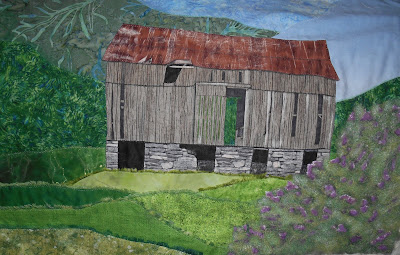 Never let it be said that your intrepid blogger fears showing you her failures. 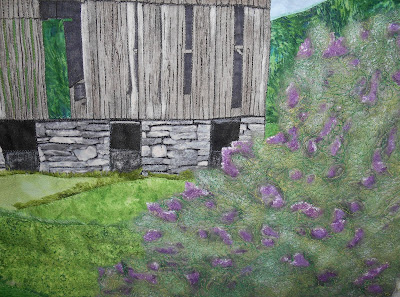 And before you all think that you should leave a comment telling me that it looks wonderful, I know better.  Remember, your momma taught you not to lie.

Oh, and just so you don't think I wasted all that time and effort....I now have the base for a postcard and three atc's.  Waste not, want not.

- There's an interesting way to cast on for knitting using a crochet hook HERE.

- Check out the links HERE for some really nice tote bags.

- You would need the space for one of THESE in your sewing area but if my room was bigger, I'd happily create one.

- Although THIS is originally intended for a suitcase for little girls to play with, wouldn't it be a perfect hold-all for our crafting supplies/fabrics?

- THIS is a scrapbooking design, but wouldn't it translate amazingly into a quilt?

Today's quote..."Maybe the journey isn't so much about becoming anything.  Maybe it's about unbecoming everything that isn't really you, so you can be who you were meant to be in the first place"

Posted by Magpie's Mumblings at 10:20 AM