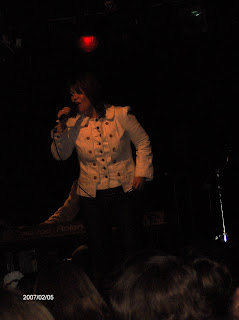 I know, the picture is dark, but so were the surroundings. Rest assured, this IS Jann Arden and she was absolutely wonderful. She is every bit as personable as I had been led to believe (she has a wicked sense of humour!). She sang several of her hits and did several of the new songs on her latest album which is being released today. She answered questions from the audience, she sang, she talked about her life, she was totally charming. Her band is excellent. What else can I say?

Her new album is great and I encourage anyone who likes Jann to hurry and buy it. It's a 'cover' album primarily where she covers songs by other artists (ie 'Peace Train' , which was a hit by Cat Stevens originally). It appears that the first radio release from the album will be 'At Seventeen', originally done by Janis Ian.

If you're interested in Jann, she has a web site www.jannarden.com and she'll be appearing at Massey Hall April 24, 25, 26. I'd love to go!
Posted by Magpie's Mumblings at 3:57 PM