Sometimes I love my mailman!!

Anyone who crafts knows how much fun stash enhancement is...right?  Especially when it comes from someone who 'gets' what you do.  Well, imagine my astonishment and delight when all these wonderful things arrived via the post office!  I have attempted to photograph just SOME of what was stuffed  judiciously placed into a rather large box.  Photos simply don't (and can't) do justice to what I discovered inside the box!! (and this is only a taste of what I found in the box) 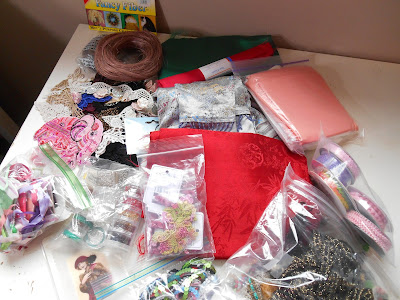 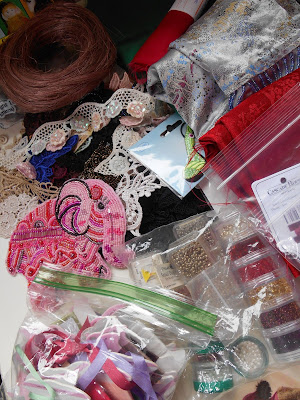 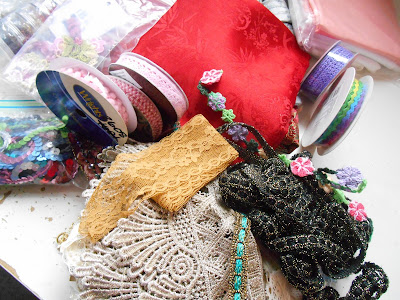 THANK YOU CAROL!!!
You definitely 'get' me!!

********
For those of you who are following 'The Saga of the Bernette', perhaps you will be interested to know that it was 'fixed' - in theory, anyway.  I haven't been home long enough to be able to test it as much as I'd like but at least it's better than it was.  The problem - according to the repairman - was that I (!!) had broken a needle in it and that, in turn, had punctured a hole in the bobbin case.  Ummmm.....I have been sewing for probably fifty years and I can't remember ever having broken a needle, and I certainly didn't in this one.  Told him as much, but it appears he didn't believe me.  At any rate, the bobbin case has been replaced - no charge - and we will see if it's any better.  Stay tuned!!
************

- I found THIS post interesting, if only from the standpoint of reading about someone else who had difficulties with fabric marking pens not disappearing and coming back to haunt you.

- Mary Ann has an interesting post that references all the names for the March moon - and I must admit that I was surprised about it being called the 'worm moon', among other names.  Go HERE to find out more.

- For those of us who knit or crochet there's a really interesting article HERE comparing the actual weights of different worsted yarns that are purported to be the same.

- THESE are done digitally, but wouldn't they be wonderful done with fabric?

- Have a look at the beautiful fibre art HERE.

Today your quote is from Lee Strobel....."He came into this world to make dead people live"

Posted by Magpie's Mumblings at 1:45 PM