Something a little different

Over the weekend I played with some of my now almost-defunct denim stash and made a couple of the little hats for our grandsons from the link I gave you  a day or so ago.  Pictures aren't great, but I think they turned out rather cute. 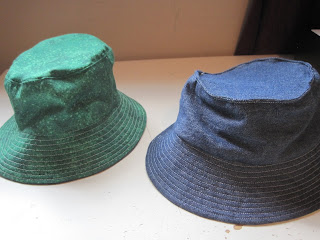 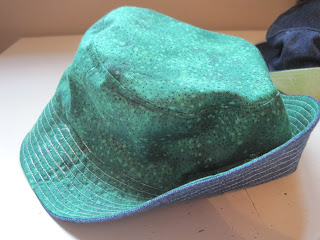 They're reversible - with denim on the outside and some green cotton from my stash on the inside.  Pattern is the 'Reversible Bucket Hat' from HERE.

- Oh wow!  Karen Ruane has just announced her amazing new online venture and it's a doozy!  An entire year of playing and learning with her (along with the rest of the participants).  It's a not-to-be-missed opportunity, so go HERE and HERE to learn more.

- There's a really pretty idea for a bag HERE.  The pattern for the bag itself isn't there, but there are tons of free patterns out there that could easily be adapted.

- If you'd like to try making your own patina mixes, have a look at the post HERE.

- Does your jaw need some exercise (as it drops open in amazement?), then have a look at THIS.

Today, instead of a quote, I have a poem to share with you...

The Soldier stood and faced God,
Which must always come to pass.
He hoped his shoes were shining,
Just as brightly as his brass.

"Step forward now, Soldier,
How shall I deal with you?
Have you always turned the other cheek?
To My Church have you been true?"

The soldier squared his shoulders and said,
"No, Lord, I guess I ain't.
Because those of us who carry guns,
Can't always be a saint.

I've had to work most Sundays,
And at times my talk was tough.
And sometimes I've been violent,
Because the world is awfully rough.

But I never took a penny
That wasn't mine to keep.
Though I worked a lot of overtime,
When the bills just got too steep.

And I never passed a cry for help,
Though at times I shook with fear.
And sometimes, God, forgive me,
I've wept unmanly tears.

I know I don't deserve a place
Among the people here.
They never wanted me around,
Except to calm their fears.

If you've a place for me here, Lord,
It needn't be so grand.
I never expected or had too much,
But if you don't, I'll understand."

There was a silence all around the throne,
Where the saints had often trod.
As the soldier waited quietly,
For the judgment of his God.

Posted by Magpie's Mumblings at 11:18 AM