She's finished! And an update 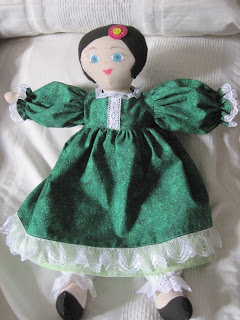 As I mentioned previously, she's created from several different patterns as well as some parts that have been pulled out of my head.  I'm still not overly pleased with the design so the next one will change again.  My original pattern had pantaloons, a camisole AND a slip - this one has been pared down to just pantaloons (I did make the camisole & slip and decided they made her too bulky).  This one has both an underskirt and an overskirt - again too much.  The next one will have just one skirt.  The sleeves are too bulky too - and they will be downsized somewhat to make them a little more manageable.  My original doll had yarn hair - which was a complete and total PIA to make, quite truthfully.  I've tried her with curly yarn hair and with straight and none of them suit my requirement of playability (and yes, I know that's not a proper word!!).  This one has felt hair which is glued on and is quite a bit safer for curious little fingers.  The next thing is to re-do her facial features.  Stay tuned - there will be more!!

And....look at what appeared in my sewing room doorway just a few minutes ago!! 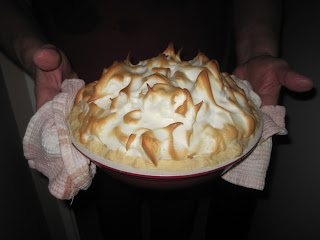 Further on the sewing machine front - I took it back to the store for a service call yesterday and am, at least so far, pleased with the outcome.  It has gone from sounding akin to a threshing machine to almost purring.  Who knew?  The girls in the store had quite a laugh over the expression on my face when I first tested it out.  I had gotten used to the various clunks and thumps and growls and was quite astounded that it could sound so quiet!  Now I'm in the process of testing it at home and will be giving it a workout over the next couple of weeks to be sure everything is working as it should.  Phew!!

- THIS is a really interesting pattern for a quilt block.  Not that I'm a sane quilter, but I know some of you are!

- THIS fits under the 'awwwww' category!

- Never let it be said that this blogger fears ANY subject - so - how about making one of THESE for your bathroom?    I actually have one of these that I bought many years ago and it's invaluable!

- Wish I had known about  THIS when I was heavily into working with recycled denim!

Today your quote is from the Dalai Lama..."There are only two days in the year that nothing can be done.  One is called yesterday and the other is called tomorrow, so today is the right day to love, believe, do, and mostly live"

Posted by Magpie's Mumblings at 3:47 PM