We spent the weekend re-doing our bathroom.  As usual, I forgot to take a 'before' picture, but trust me, it wasn't a thing of beauty!  The people who are in charge of our apartment building painted it before we moved in and decided that every square inch of it should all be blue....walls, ceiling, door....everything.  I like blue (it's one of my favourite colours actually) but having it surrounding you on all sides was a bit more than I could handle.

Our bathroom is re-a-l-l-y tiny - typical of an apartment I guess.  The tile, tub, and vanity are all old - probably dating back to when the building was first built about 35 years ago.  The tile is basically white with stylized flowers in blue and gold (or what passed for it in those days).  The counter top is a blue-ish grey marble arborite.  Nothing 'goes' with anything else.  I brought home dozens of paint chips trying to come up with something that would work, and finally settled on a dark brown.


Here's a couple of pictures... 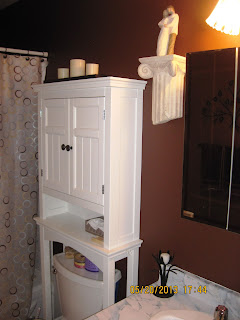 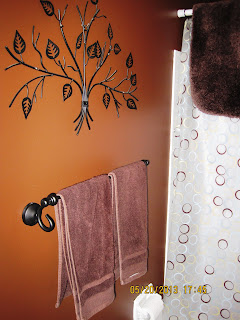 The top picture is more true to the actual colour.
We replaced the medicine cabinet above the sink (the other one was rusty beyond repair) when we first moved in and also picked up the additional storage cupboard that sits above/around the toilet.  On the opposite wall we have just put in a new towel rack (MUCH nicer than the generic one that was there before).  The 'tree' above the towel rack was a $2 find at a local store.   It was meant originally to be a candle holder and we removed the candle holders in favour of just the tree.  The only thing I want now to complete the re-do is something decorative for above the cabinet....I'm envisioning something with a touch of greenery in it and perhaps in the same style as the piece (a thrift store find) that the figurine stands on.  It's hard to tell from these pictures but the shower curtain is a white background with circles of blue, gold and brown which tie in with the colours of the tile and the paint.

Posted by Magpie's Mumblings at 6:04 PM