And so it begins (again!)

The beginning of another landscape.... 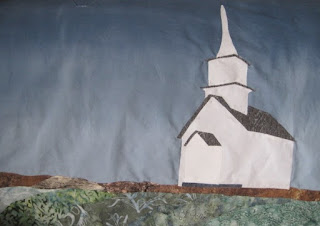 For some reason the spire looks crooked, but
in real life it isn't.


- One of the things about shawls I find annoying is that they don't stay in place...THIS one might just be the exception!

- Have a look at the amazing work done by THIS artist.

- Never let it be said that when you come here to Chez Magpie there isn't an eclectic mix of reading material for your viewing pleasure.  Don't blame me for THIS one (I have grandsons, what can I say).

Posted by Magpie's Mumblings at 2:47 PM