Well, never let it be said!

Most of you know already that computer illiteracy reigns supreme at Chez Richardson and also that recently I had to start over with my computer.  Some of you may already know that I am also stubborn (I know, who...moi?).  I hate to say that some of the lack of pictures on this blog has been a result of my not being able to figure out how to get my camera and my computer to go off in the corner and play nicely.  They have been squabbling.  The discussion going on has been quite disturbing.  First the computer says nope, I don't wanna play on your swings.  And then the camera says well, if you don't want to play on my swings, then I don't want to play catch with YOU.  And so it's gone.  One side trying to best the other and poor little ol' me in the middle, trying to be a peacemaker.

There has been infighting.  And swearing (not that I would EVER resort to such tactics!).  There has been removal of programs and installation of programs.  Finger crossing.  Muttering and (dare I say it) mumbling too!

End result of all that is to say that I think I have won. 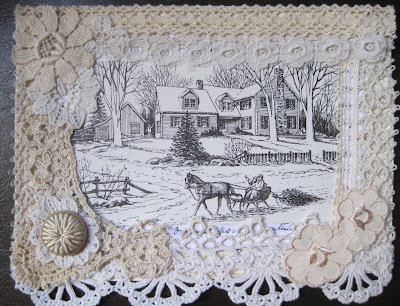 Phew!  All this angst, just to show you something that I made over the past while.  This is a Christmas card that is currently winging its way to my cousin in Australia.  Hope she likes it!

Today the quote (and a fitting one, I might add) is from Steve Wozniak....  "Never trust a computer you can't throw out a window"

Posted by Magpie's Mumblings at 7:30 PM