Yes, I am going to rant.  However, I am giving you fair warning so you can go elsewhere and read something far more interesting I'm sure.


Still here?  Well, don't say you weren't warned!!
My first mistake was getting out of bed on Saturday.  I realized, as the day progressed, that I shouldn't have.

Mid-afternoon the phone rang and call display said it was (supposedly) our Visa credit card company.  Hmmm....said I....probably a scam....so I didn't answer it.  No....they left a message to call them.  Oh oh.

I called, and got a person who just got off the stupid train.  Obviously a one-way train at that.  In order to supposedly confirm that I was who I said I was, she needed to ask me a number of questions.  All of those questions would have been easily answered (correctly) by any person who was up to no good.  I asked her why she wasn't requiring my so-called 'security code' and she didn't know what that was.  Say wha....????  At that point, I hung up, fairly convinced it WAS a scam.

Called the # on the back of the credit card and got another person (she'd been on the back of the train with the other one) who confirmed that Person #1 was, indeed, legit.  Okay.  Now what.  Apparently, totally unbeknownst to us we have managed to change our address to a place in British Columbia and THEN to a place in Quebec (funny - I don't remember moving).  THEN she decided to argue with me that our previous address could simply NOT be the one we actually DID previously live at and insisted that it had to be in British Columbia.  Dumb. As. A. Post.    (Did I mention that my blood pressure is normally so low that it alarms most medical people?  I think, by this point, said blood pressure was off the charts in the OTHER direction!!).

Finally got her sorted out (I think) and the next step was to wait until today and phone the two credit reporting agencies here in Canada and ask them to 'red flag' our account (so that they have to contact us should there be any unusual activity).  Made sense.  Right?

Well, I was on the phone this morning first thing to Credit Reporting place #1.  It's one of those automated things - push 1 for this, push 2 for that, push 3 for.....(well, you get the picture).  Unfortunately, with all this pushing of buttons and waiting through all the options, their system insisted on kicking me out which required me starting over at the beginning.  Several times.  (see above note regarding blood pressure)

Finally managed to wrangle a real-live person.  And guess what?  She got off the SAME train!!!!  It was simply impossible that we didn't live in Montreal.  She finally decided that she would 'change our address' in the system, but as for doing anything so smart as to red flag our account, why no.  She couldn't possibly do that.  I would have to fax in the proper form.  What form?  And where do I get it?  Oh, sez she (quite vaguely).....I think it's on the website.  ARGH!!!

Found form, filled in form, faxed in form.  Now how much to you want to bet they'll get said form and take one look at our address and say 'but you live in Montreal' and don't do anything?

Carpet cleaner came and went and I mustered my courage and called the second credit agency.  After two minutes of canned music I got a real-live person.  She listened to my tale of woe.  She understood.  She did the proper things with her computer.  It took less than fifteen minutes.  I wanted to kiss her feet.

...oh, and did I mention that the building superintendent arrived at the door in the midst of all this to tell us that there'd been a mix-up with our automatic debit for our rent?  And that we owed them money?.......

At that point, we left.  We locked the door and got out of town.

Never let it be said that life doesn't get complicated at Chez Richardson!! 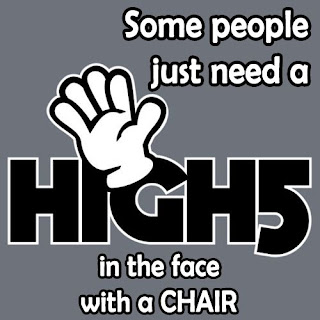 Posted by Magpie's Mumblings at 8:02 PM