Queen of Hearts is here 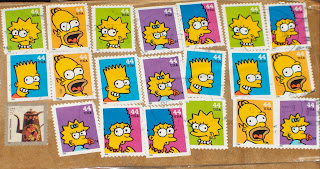 The next doll, belonging to Jeanne, in the Art Doll Coolaberation has arrived. There was a great ruckus on my front step this afternoon, which set the dogs barking and the cats running for cover. I reached the door just in time to see the postal vehicle screeching away from the curb, obviously in a tearing hurry to get away. I didn't even have to look to know who had arrived! The Queen of Hearts was here and, in her usual demanding way, wanted OUT of her box to see where she was. I think part of the racket was the Simpsons telling her to shut up, but then again, maybe it was HER telling them to get out of her face. I can't say I wasn't warned about her, so I made sure to stock up on ear plugs and I have a padded room all ready.

The first thing she did when she popped out of her box was to look around my studio and she wasn't long narrowing in on the best seat in the house. She turfed my poor doll out and settled herself, all ready to rock. Now she's demanding a cushion to rest her royal bum upon! 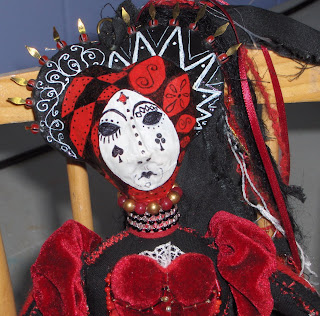 She's a beautiful doll and I can't wait for her to tell me what she wants!
Posted by Magpie's Mumblings at 3:26 PM