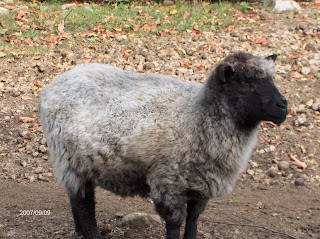 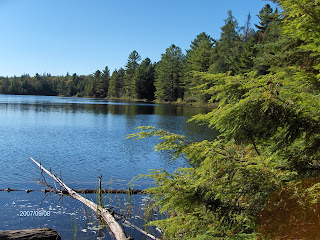 Mary Anne....the sheep!! I know, you're all wondering why on earth I would be showing you a picture of a sheep. Well. I have a wee story to tell.
During my disappearance from the blogging world, we were away at a wonderful B&B just outside Algonquin Park (for those that don't know, it's a very large provincial park north of where we live). The owners of the B&B had three sheep, which she used to make her own yarn and wonderful felted projects.
The B&B itself is located approximately a mile and a half in the bush and is quite isolated from civilization as such. For miles around there is nothing but trees. The sheep themselves were penned beside their pond (which to me is more the size of a small lake). We visited them on Friday night when we first arrived and planned to take some pictures the next day when the light would be better. So....
after a wonderful (and tiring day) of hiking in the park, we returned to the house (the owners were away at a wedding) and proceeded down to the pond and the sheep pen, only to find the gate askew and no sheep! None. Jack and I stared rather wild-eyed at each other and, despite our best intentions, realized we stood no chance of tracking them down in all that bush and would only be lost ourselves. We felt really, really bad because we knew there were wolves and bears in those woods and that wolves and bears really would like to 'eat' sheep! So.....
feeling sad, we left a note on the kitchen counter to explain the situation, signed it with my name, and went off to bed. About two hours later, the owners arrived home and all I could hear was laughing. Hmm...obviously they had tied one on at the wedding and didn't fully appreciate the seriousness of the situation.
We awoke the next morning to the baaing of sheep and heaved a sigh of relief that obviously the owner had managed to track them down. We went down to breakfast and asked the obvious question, only to be greeted with more laughter. As it turns out, the sheep had gotten out before, but this was the first time one of them had left a note saying they were gone! So....meet my namesake...Mary Anne!!
As a footnote to the story, the sheep hadn't escaped at all...they were simply moved to another pen which we were unaware of and couldn't see readily. And, the reason they hadn't tumbled to the fact that my name is Mary Anne is because the registration at the B&B was done as 'Mary'. We all had a great laugh and I just had to take a picture of myself to post here.
The other pic is just one of the many I took of the fine scenery in the area.
Posted by Magpie's Mumblings at 6:58 PM