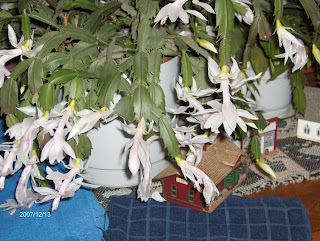 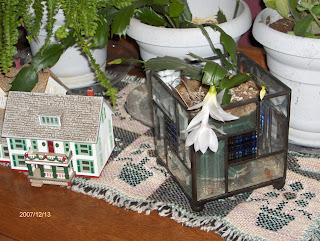 I don't remember if I told this story last Christmas, and if I did I'm sorry to repeat myself. However, I have enough new readers so I think its ok to present it again.
The top picture shows a white Christmas cactus in full bloom in my dining room and the second picture shows its baby. The 'story' behind this is that my mother hated (with a passion) white flowers - a fact that was well known by everybody. Jack (my DH) had established a tradition of getting her a plant of some nature for Christmas. One year he spied this white (horrors!!) cactus and just HAD to buy it for Mom. Of course she opened it on Christmas Day and through what were obviously gritted teeth, thanked him. She dutifully hung the plant in the living room window, quite hopeful it would expire sooner rather than later. Of course it didn't and bravely bloomed at least twice a year. Each time I would get the same phone call "You know that damn plant? It's blooming - again".
This went on for several years until finally Mom decided she had enough of it and flatly refused to water it. Yep - you guessed it "You know that damn plant? It's blooming - again". When Mom passed away it was the only plant I kept and it blooms faithfully for me too. Now it has babies that are blooming too! It will be known as That Damn Plant for evermore.

Posted by Magpie's Mumblings at 6:48 PM