In the interest of reducing my stash of denim (which is overflowing the assigned storage area) I decided I simply HAD to make one of these... 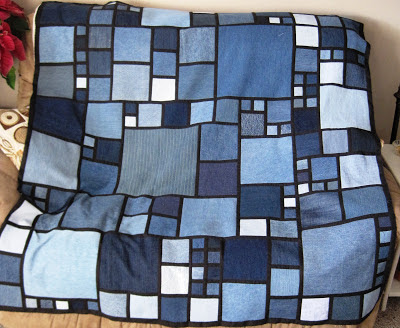 Jack decided he really liked it (husbands don't, as a rule, wax poetic about things we make) so...it will become a throw for the back of our couch.  Then he announced that it would be really nice if I were to make two smaller ones to go over the back of our chairs too.  Hmmm.  Well, this morning I cut out more denim and have one sewn up already.


However, can anybody tell me
WHY
the stash bucket is STILL
overflowing??

Pattern for the quilt is from HERE.  It's an adaptation of Kaffe Fasset's Jewel Squares from the book 'Glorious Patchwork'.
Posted by Magpie's Mumblings at 4:07 PM