Today we did the Christmas decorating/sorting. The back of the car is full of several boxes of decorations that are heading for the thrift store tomorrow. We have altogether too much 'stuff' so downsizing is a good thing!

I promised a picture of some of the ornaments I've given over the years. Here are some of them (there's more, but I didn't want to totally bore you!). One of them is from my 'ceramics' phase (the santa at the bottom of the picture). The round ball and the pine cone were another phase I went through (thankfully I got over that one). The three little wooden snowmen were mini-swags I made one year. The santa to the right of the swag is made from paper using an image from Dover Publications. If I remember rightly I printed him off on the computer, antiqued him, stuffed him lightly and stitched around the outside.

The final picture shows three cross-stitched santas (which I think was originally a kit, but can't remember for sure). The santa with the rabbit in the basket was one of the hand painted on wood ones which were just too time-consuming for words. Finally the felt snowman, which is pretty self-explanatory from the picture. 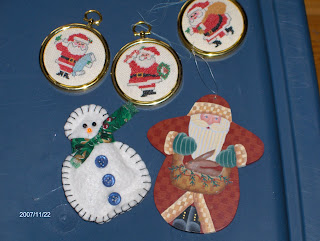 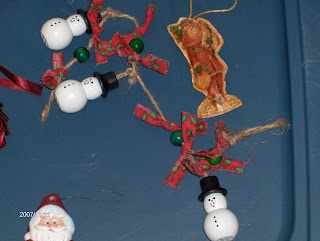 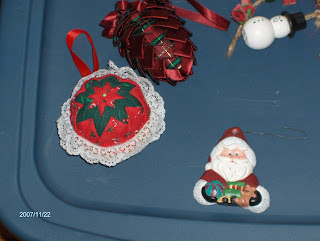 Posted by Magpie's Mumblings at 7:07 PM